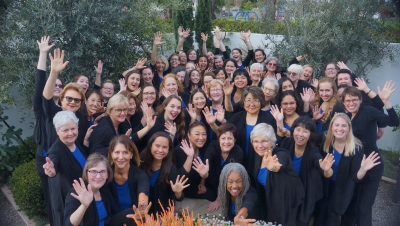 The Orange County Women’s Chorus, one of the top amateur choruses in California, welcomes new singers in all voice parts for its 2017-18 20th Anniversary Season.

The OCWC, named a 2014 Outstanding Arts Organization by Arts Orange County, has just returned from making its Carnegie Hall debut under the baton of Artistic Director Eliza Rubenstein; in 2015, the chorus traveled to the United Kingdom and delivered a prize-winning performance at the International Musical Eisteddfod (Festival) in Llangollen, Wales. The chorus is known for its musicality, creative programming, and frequent premieres and commissions, as well as for being a close-knit community of diverse women of all ages.

The group’s upcoming anniversary season includes a performance of Franz Josef Haydn’s oratorio The Creation in collaboration with the Irvine-based male ensemble Men in Blaque, as well as tour of the Pacific Northwest and British Columbia.

Prospective singers are asked to have previous choral experience and strong musicianship and music-reading ability. The chorus rehearses on Tuesday evenings in Newport Beach, close to the 55 Freeway. Auditions are brief and non-threatening!

To schedule an audition, contact info@ocwomenschorus.org or call (949) 451-8590. To learn more about what makes the Orange County Women’s Chorus special, visit www.ocwomenschorus.org and watch a short video about the ensemble!