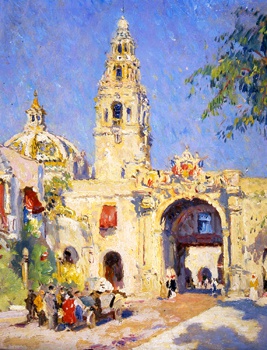 at UCI Institute and Museum of California Art (IMCA)

This exhibition is a display of some of the most celebrated works painted in California between 1890 and 1940, and combines works from the collection of The Irvine Museum, as well as paintings from several important private lenders.

Guy Rose (1867-1925), perhaps the most important of the California Impressionist painters, will be represented by two spectacular works: The Green Parasol, painted in Giverny, France, circa 1909; and Laguna Eucalyptus, painted in 1916, the signature painting of his visits to Laguna Beach.

The exhibition will feature two works by the most prominent painter of Northern California, Arthur F. Mathews (1860-1945). Monterey County Landscape, painted in 1907, is a superb example of the Tonalist style of landscape painting. Characteristic of Northern California art of the late 19th century, Tonalism features primarily the “earth tones” of browns, dark greens and deep golden yellow. Picking Poppies is a charming view of a mother and daughter on a spring-time outing in a field of California Golden Poppies.

Admission is complimentary for all visitors. Donations are gratefully accepted.