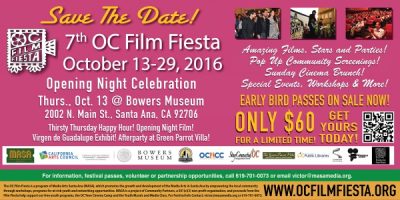 Now in its 7th the OC Film Fiesta is a cinematic celebration of Orange County’s diversity and multicultural heritage. This year’s festival runs from Oct. 13-29 and features a stellar line-up of amazing feature films, award-winning documentaries, stunning animation and fun Pop Up Community Screenings. The festival starts on Thursday, Oct. 13 at the Bowers Museum, with the Mexican musical sensation ¿Que le dijiste a Diós?, an engaging comedy that features songs by Juan Gabriel as well as an onscreen appearance by the beloved music legend, who passed away earlier this year.

“We wanted to start this year’s festival by honoring Juan Gabriel, an artist who meant so much to our community and who made his mark in film, as well as music,” says Victor Payan, Director of Media Arts Santa Ana (MASA), which produces the festival.

The evening also features the Bowers’ Thirsty Thursday Happy Hour at Tangata, which runs from 5-8pm, for those who want to start the celebration early and enjoy specialty cocktails and appetizers before the film and also see the Virgen de Guadalupe: Images in Colonial Mexico exhibit, which features objects from the Basilica de Guadalupe and other top collections in Mexico City, including a reliquary that contains a piece of the original Juan Diego tilma from 1531. Tickets for Thirsty Thursday are available at www.bowers.org.

After the screening, the festivities continue at the romantic Green Parrot Villa, located directly across the street from the Bowers.

“We really wanted to start this year’s Film Fiesta with a community celebration,” says Payan, “and we’ve worked hard to put together a lineup that is exciting, engaging and highlights Santa Ana’s vitality and Orange County’s diversity.”

Media Arts Santa Ana (MASA), which produces the festival, received funding from the California Arts Council this year, and this will help expand the festival to focus on communities throughout Santa Ana, including North Main Street, where the Bowers is located. “We will be adding some fun elements to the festival, such as Pop Up Community Screenings, more workshops, stars, premieres and discounts to local restaurants for festival pass holders,” says Payan.  In addition to the opening night screening, the Film Fiesta returns to the Bowers for two special evenings.

On Thursday, Oct. 20, the festival will feature a free screening of the powerful documentary, Code Name: Butterflies in conjunction with OC Libraries and The Big Read. This is the incredible story of the Mirabal sisters of the Dominican Republic who, in the 1950’s, opposed the dictatorship of Rafael Trujillo and created a movement to resist his power. The Mirabal sisters are the real-life subjects of Julia Alvarez’s acclaimed novel, In The Time of the Butterflies.

On Saturday, October 29, the OC Film Fiesta and the Bowers team up for a tribute to Strong Female Icons of Silent Cinema, including WARAWARA, Bolivia’s only surviving silent feature, Tepeyac, a 1917 Mexican silent film about the Virgen de Guadalupe with live musical accompaniment by Camerata Santa Ana, and Carl Dreyer’s classic The Passion of Joan of Arc, with live musical accompaniment by George Sarah.

Other festival highlights include a tribute to master Bolivian filmmaker Jorge Sanjinés featuring his 1966 classic UKAMAU and his 1989 masterwork La Nación Clandestina, which are both filmed in Aymara and will be presented with subtitles.

The Film Fiesta is also proud to present the OC Premiere of IXCANUL, the new critically acclaimed Guatemalan film, which is the first feature shot entirely in Quechua. The Film Fiesta will also feature a selection of films in conjunction with the Mexican Consulate in OC, including a classic Mexican film and selection of animated shorts for children.

Lovers of documentaries will also be delighted at this year’s Film Fiesta offerings, which include Trisha Ziff’s Ariel Award-winning documentary The Man Who Saw Too Much, Peabody Award-winning filmmaker John J. Valadez’s new film The Head of Joaquin Murrieta, Renee Tajima-Peña’s eye-opening No Más Bebés and Tadashi Nakamura’s stunning Mele Murals, which chronicles acclaimed Hawaiian street artists Prime and Estria as they reconnect with their roots while conducting a community mural project in Waimea.

A limited number of Early Bird Festival Passes are available for $50, which includes the Opening Night Film and Party. This special price is valid thru 9/28, after which passes will be $75. Festival passes can be purchased online at www.ocfilmfiesta.org.

Tickets to individual films are $10 General and $5 students. Individual tickets and schedule information will be available at online at www.ocfilmfiesta.org and at www.bowers.org for the screenings on Oct. 13, 20 and 29.

Admission to Community Pop Up Screenings is free.