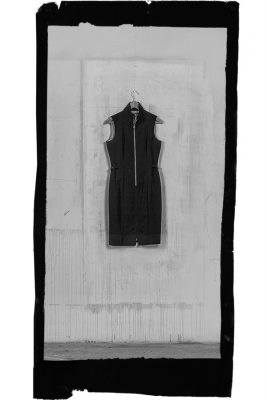 On Wednesday, September 13 from 7:30 p.m. to 9:00 p.m., Santa Ana College (SAC) will host an opening reception for “Air Becomes Breath,” an installation by artist Richard Turner. He is a professor emeritus at Chapman University where he taught Asian art history and studio art and co-directed the Guggenheim Gallery.

When Turner’s wife Sylvia died from pancreatic cancer in May 2016, Richard experienced the dreadful moment “When Breath Becomes Air,” the title of the book by Paul Kalanithi that chronicles the author’s struggle with stage IV metastatic lung cancer. In September, just a year after Sylvia’s death, air propelled by fans throughout the gallery will become the breath that will animate black-and-white images of Sylvia’s clothing printed on long white silk banners.

“Clothes are made for living, breathing bodies. The black-and-white images of the clothing are expressions of absence and loss,” says Richard.

Richard is no stranger to commemorative art. His first such piece, “The Book of the Disappeared” was installed in the SAC art gallery in 1984. Other memorials, both temporary and permanent, followed: “Reliquaries” (1986), “Memory’s Vault” (1988), “Anaheim Veterans Memorial” (1999), “See Angkor and Die” (2009), the “Japanese American Farmers Memorial” (2015) and several others.

Creating “Air Becomes Breath” however, was different for Richard because it was the death of his wife of 48 years that he was commemorating rather than the lives and deaths of persons unknown to him. With that in mind, Richard enlisted the help of his daughters Adrienne and Jennifer as well as six of his wife’s friends to select the pieces of clothing that best exemplified her sense of style. From the 50 pieces that were photographed by Michael Farrel, a former student of Sylvia’s, they chose 14 images.

The garments selected range from formal attire to work clothes to informal wear. Among the selection are mother-of-the-bride dresses from her daughters’ weddings, dresses that she wore to work at Santa Ana College as dean of fine and performing arts, a dress that she took when traveling with Richard, and more. Each piece reflects the essence of Sylvia’s style.