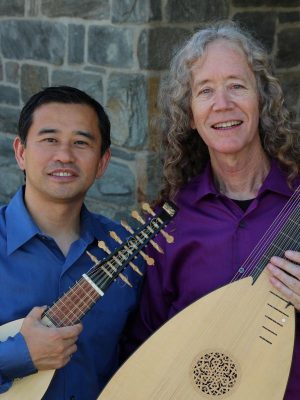 Presented by Claire Trevor School of the Arts at UCI (CTSA) at University of California, Irvine - Winifred Smith Hall

Critically acclaimed virtuoso of plucked instruments since age nine, John Schneiderman specializes in the performance practice and repertoire of eighteenth-century lutes and nineteenth-century guitars.  Based in California, Mr. Schneiderman is in demand as a soloist and chamber musician collaborating on recordings and performances throughout North America.

Beginning his performance career as a banjo, guitar, bass and fiddle player, the young Schneiderman was a familiar face on the stages of bluegrass and folk festivals throughout California. Mr. Schneiderman studied with British guitar pedagogue and author Frederick Noad, and continued his studies at the Schola Cantorum in Basel, Switzerland, with the great modern pioneer of the baroque lute, Eugen Dombois. Mr. Dombois’ precise and detailed approach to the repertoire continues notably to influence Schneiderman’s interpretations today.

Hideki Yamaya is a lutenist and early guitarist based in Portland, Oregon, USA. Born in Tokyo, Japan, he has lived all over the United States before settling in Portland, where he is a freelance performer and teacher. He has a B.A. in Music and an M.A. in Ethnomusicology from University of California, Santa Cruz, where he studied with Robert Strizich, and an M.F.A. in Guitar and Lute Performance from University of California, Irvine, where he studied with John Schneiderman. He also studied with James Tyler at University of Southern California and with Paul Beier at Accademia Internazionale della Musica in Milan, Italy. He has had master classes with the foremost lutenists of today, including Robert Barto, Victor Coelho, David Dolata, Ronn McFarlane, Richard Savino, and Stephen Stubbs. In demand both as a soloist and as a continuo/chamber player, Hideki has performed with and for Portland Baroque Orchestra, Portland Opera, Santa Cruz Baroque Festival, Baroque Northwest, Musica Angelica Baroque Orchestra, Los Angeles Master Chorale, Los Angeles Opera, California Bach Society, Oregon Bach Festival, and Astoria Music Festival. He is one half of the Schneiderman-Yamaya Duo and is the artistic director for Musica Maestrale, an early music collective based in Portland. He is an internationally acclaimed musician and has performed in Canada, Japan, Great Britain, Germany, and Italy.

Shuttle services will begin one hour before showtime and will meet patrons on Level Two (Mesa Road street level) of the Mesa Parking Structure, by the elevator. Advance notice is appreciated, but not required.  For additional information, please call the Arts Box Office (949) 824-2787 or email artstix@uci.edu.  (Schedules are subject to change. See posted schedule at http://www.arts.uci.edu/shuttle)