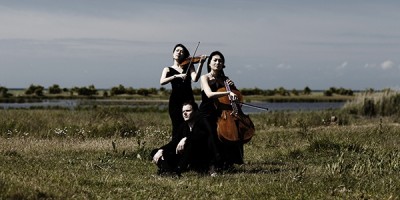 Critics have praised the Trio for its “sparkling joie de vivre” and “magic dialogue”. The Salzburg Mozarteum stated, “They cast a spell over their audience . . . so alive, so musical . . . ravishing.” This piano trio is fast becoming a ‘rising star’, having performed in major concert halls throughout the world.

The superlative quality of Trio con Brio Copenhagen has been recognized not only by audiences and critics, but by some of the most important and renowned musicians of our time. Trio con Brio Copenhagen is one of only four recipients of the Kalichstein-Laredo-Robinson International Trio Award, one of the most coveted in the world of chamber music. This biennial award, with a panel of prominent musicians as judges (members of the KLR Trio as well as pianist Claude Frank, violist Michael Tree of the Guarneri Quartet, and Peter Wiley, former cellist of the Beaux Arts Trio), carried with it appearances on twenty major concert series across the USA, including New York City's Carnegie Hall, thereby introducing an extraordinarily accomplished “rising” piano trio to American audiences.