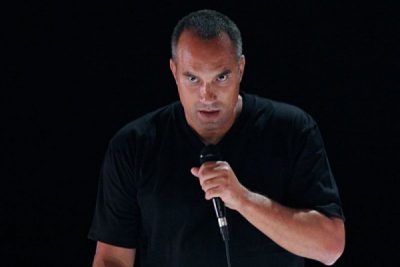 History, poetry and tragedy collide as Roger Guenveur Smith tackles the thorny odyssey of Rodney King – from his first shocking appearance in the national spotlight as the victim of police brutality, his involuntary martyrdom that ignited the L.A. riots, to his lonely death at the bottom of a swimming pool. Smith deftly deconstructs the media frenzy to reveal a startling humanity at its center. In light of current events that beg comparison, Smith’s work resonates with a new immediacy. He seamlessly fuses facts and friction, motion and emotion into a gripping narrative that poses impossible questions while illuminating his subject with grace and empathy. The multi-talented Smith starred in the HBO series K Street, OZ and Unchained Memories: Readings from the slave narratives and previous theater triumphs, including The Watts Towers Project and Juan and John.