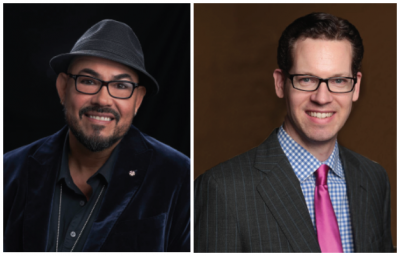 Salvador Perez, President of the Costume Designers Guild, joins FIDM Museum Curator, Kevin Jones, for a special discussion about Perez’s career as a prominent costume designer, as well as traditional saris from the FIDM Museum Collection.

Viewers are invited to submit their own questions for Salvador Perez and Kevin Jones to potentially be answered live in the discussion. From Monday, August 2nd through Wednesday, August 4th, check the FIDM Museum Instagram (@FIDMMuseum) stories for a chance to have your question included in the discussion!

Due to the spontaneous Q&A format of the program, topics of conversation may vary but likely to include:

Perez’s career highlights as a major costume designer and his role as CDG President.
The costumes on his recent Netflix series, Never Have I Ever, and how they relate to “Traditional Saris” in the FIDM Museum Collection.

Contemporary fashion influences on Four Weddings and a Funeral and The Mindy Project.

FIDM Museum’s annual costume exhibitions, in which Perez’s costumes have been featured many times:

After the debut, the video will be posted to YouTube and FIDM Museum IGTV.

Salvador Perez’s work is very diverse. He has designed for many TV series including Castle, Veronica Mars and 6 Seasons of The Mindy Project, where he was nominated for an Emmy for costume design. Salvador has also worked on movies such as Pitch Perfect 1, 2 and 3, Think Like a Man 1 and 2, and Men of Honor. His most recent include two popular Netflix series: Four Weddings and a Funeral and Never Have I Ever. Born and raised in Central California, Perez moved to Los Angeles to attend FIDM to pursue a career in fashion design. Once other Costume Designers discovered his costume manufacturing talents, he began running the costume workrooms and assisting on films like Titanic and The Flintstones. Outside of film and TV, Salvador designed and developed the “Movie Legends Line” for the J. Peterman Catalogue, he designed a line of Jewelry for Bauble Bar, and designed a signature line of colorful coats for GILT.COM. He is currently the elected president of the Costume Designers Guild.

FIDM Museum’s “Collection Conversations” is a bimonthly series from the FIDM Museum, airing via Instagram Live that gives the viewer a “behind-the-scenes” glimpse into the world of historic fashion. FIDM Museum has one of the nation’s finest historic fashion collections and is comprised of more than 15,000 objects, dating from the 18th Century.

In each episode, museum curators discuss an aspect of the collection and interview fashion historian colleagues about objects that match their expertise, or chat in-house about collecting, preserving, researching, and exhibiting fashion.