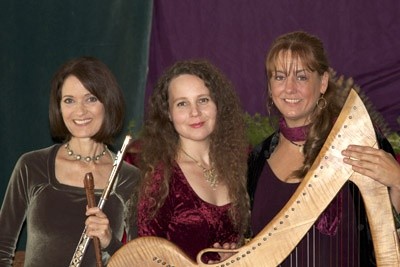 Live! at the Museum - Celtic Consort of Hollywood

The Celtic Consort of Hollywood consists of award winning concert and studio musicians Christina Linhardt, Susan Craig Winsberg and Shawna Selline. Together and separately they have performed all over Southern California (as well as abroad) from the Dorothy Chandler pavilion to Disney Hall, with weddings, club dates and recording sessions in between.

Christina Linhardt has enjoyed an eclectic and versatile career as a concert singer, producer, cross-over artist, actress and dancer She is most known for her "Classics to Cabaret" act (which was the headliner for the opening of the Grand Concert Hall in Saxony, Germany), and her independently produced cds, "Circus Sanctuary" and "Voodoo Princess". For the 2010 Los Angeles Opera Ring Festival, Ms. Linhardt was contracted for two concerts premiering several new musical compositions written for her. She is a recommended chanteuse for the coveted Southern California Chamber Music Consortium. In Los Angeles, she is the official national anthem singer for the German Consulate, and represents Berlin every year at the Los Angeles Sister Cities Festival. She has performed her act at the Hollywood Magic Castle, the House of Blues Gospel Brunch and even down in Guantanamo Bay, Cuba. She recently produced a documentary about the Gitmo experience titled "Guantanamo Circus" which has screened at festivals and Universities across the US and the UK winning the Hollywood FAME Award 2013. She received her Bachelor's of Music in Vocal Arts from the University of Southern California.

Susan Craig Winsberg began her musical studies in her hometown of Chicago at the age of five on the piano. She began playing flute at the age of ten. Years later she received her Bachelor's and Master's degrees in Flute Performance from San Jose State University, where she studied with Isabelle Chapuis of the Paris Conservatory, and went on to perform professionally throughout the U.S., Europe and Canada, including playing co-principal with the Monterey Symphony Orchestra in California. The past twenty years have seen her delving into other genres of music, including Celtic, New Age, Jazz and Mariachi, along with expanding her instrumental skills to Irish wooden flute, pennywhistle and recorder. She has played with the Angels of Venice since 1999, with the Mariachi Divas since 2007, and she's had her own Celtic band Blackwaterside since 1995. Susan has received two Grammy awards and two nominations as a member of the Mariachi Divas, and has released four CDs of Celtic music on her own label Craig Records. She also teaches piano and flute in the Los Angeles area, and continues to perform recitals, recording sessions and concert tours.

Shawna Selline is an award winning harpist and composer. She began study of the Celtic harp at an early age and quickly progressed to playing in Irish sessions and for local events. Shawna continued to study music in college supporting herself as a street musician at renaissance fairs and festivals. Shawna won several national and international awards including the prestigious All-Ireland harp competition. Her love of the Celtic harp and Classical Baroque music influenced her writing for chamber ensemble adding Classical harp along the way. She has performed internationally, toured, recorded for film and television and brought her artistry to support others in celebrations, meditation and healing through music therapy. Shawna raised three musical children and continues to teach and play throughout California