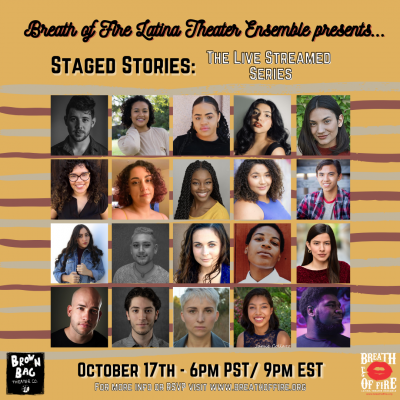 An evening of fun, thought provoking, relevant new works, music, poetry and interviews –  a result of our commitment to holding space for artists in our community. For this episode Breath of Fire is reaffirming its partnership with Brown Bag Theater Company (BBTC) of UC Irvine. Through our free workshops and community engagement events in Orange County, it is our hope that we continue to foster the growth of BIPOC artists and scholars by supporting Brown Bag Theater Company in their future endeavors for the upcoming school year. We provide resources to storytell, to workshop, table read, discuss, devise, perform, and more. This is a FREE event. Donations made to this episode will be to support Brown Bag Theater Company.

8.28.20 & THEIR HATE written and performed by Taylor Fagins~

BEST THING IN THE WORLD written by Stacey Manos~

co-directed and performed by Jamie Collazo~

A WOVEN FUTURE written and performed by Rowan Campbell

Hosted by Lorna Silva.*  Q & A moderated by Diana Burbano*

JESÚS LÓPEZ VARGAS~ (Performer & Playwright, 31ST) is currently one his last year as a Master of Fine Arts Stage Management candidate & the very first international student in this particular program at the University of California, Irvine. He graduated with a BFA in Technical Theatre and a concentration in Stage Management from UT at El Paso in the Spring of 2018. Jesús​ has professional experience as an entertainment journalist, translator, production & project manager, lighting designer, freelance event & portrait photographer, video editor and as a publicity artist. He has worked professionally in both the United States & México. Full bio:  lessfearmorechange.wordpress.com

AUDREY NAPOLI~ (Actor, BEST THING IN THE WORLD)  is very excited and honored to be collaborating with the Breath of Fire Latina Theatre Ensemble and to be bringing Stacey Manos\’s beautiful play to life. Audrey is currently attending the University of California, Irvine as a 4th year undergraduate studying directing and acting. She has most recently portrayed Libby Tucker in Neil Simon\’s I Ought To Be In Pictures at her University as well as Juliet in Romeo and Juliet. She is very grateful to be playing a strong and independent latina woman and hopes you enjoy the show! Instagram: @audreystartedthefire

SOPHIA K. METCALF~  (Actor, BEST THING IN THE WORLD) is an MFA-trained actor, singer, and interdisciplinary performer. They are currently based in Irvine while they complete their MFA in Acting at UCI. They have also lived in New York, Munich, and Montreal, where they received a BA in Music and Drama from McGill University.  They most recently appeared in Netflix’s I Am No Longer Here directed by Fernando Frías de la Parra. They were also a featured vocalist on Portrait of Frances, Enclosed (Palm Springs 2020).  At UCI, they co-founded UCI’s first queer theatre company, Brick Theatre. They also regularly write and perform with the UCI Neofuturist Collective, 30 Plays in 60 Minutes. Other recent theatrical roles include: Odysseus in The Penelopiad, Duncan/Lady MacDuff in Macbeth, and the one-person mask show, “Rufus”. Their  podcast, Oma Ghost premiers on October 1st, wherever you get your podcasts. They are also constantly collaborating on new things so check back in soon or get in touch. They are also an academic, primarily interested in the queer and/or female body’s radical occupation of public and performative spaces. This has manifested in performance art, activism, and publications. Instagram: @sophiakmetcalf  melizagutierrez.com

ROWAN CAMPBELL~ (Poet, Director & Performer, A WOVEN FUTURE) Rowan is a recent UCI graduate who studied theater. She is from Washington DC and has a classical music background. She will be Pershing graduate school in 2021.

CASSANDRA LYNN BRIDGES~ (Performer, A WOVEN FUTURE) Cassandra Lynn Bridges recently received her bachelor’s degree in drama from University of California, Irvine. She is an aspiring actress, writer, and director. Her ultimate goal in life is to create art that represents and uplifts black women in society.

KASEY BLACK~ (Performer, A WOVEN FUTURE) is  a current 4th year drama student at UCI. She has always loved acting ever since she was a child. SheI believes, especially with the given climate, that it’s important to create art. Black art. To uplift others and inspire. She’s  excited to be a part of this project!

ARIELLE SCHEXNAYDER~ (Playwright & Performer, GRADIENT (trio) ) graduated in 2019 from UCI with a B.A. in Drama, and worked in many productions with BBTC during her time there. She currently is an essential worker at Target while trying to engage in as much art as possible. Events like these keep her involved in the local arts community and she is very grateful for them. Instagram: @ariellethesassy

ANGELICA ROWELL~ (Poet & Performer, TRUTHS UNKNOWN) is a singer, actress, writer, and plus size model based in Los Angeles, California. She holds degrees in both Classical Voice and Theatre from the University of California, Irvine.   She is  passionate about  social activism through the arts and strives to  create works that open doors for the marginalized, as well as initiate a dialogue about controversial topics.

VICTORIA YVETTE ZEPEDA*~ (Producer/ Playwright, ¿DÓNDE ESTÁ LA DIVERSIDAD?) is a multidisciplinary theatre artist from San Diego, CA. They are a UC Irvine Alum (Honors in Drama, 2019) whose career has driven them to decolonize American theater by pushing forward narratives for and about the Latinx community. Previously, they were the Artistic Director of Brown Bag Theater Company (UCI) from 2016-2019. Currently, they are an ensemble member for the following companies: Breath of Fire Latina Theater Ensemble in Santa Ana, CA and Amigos del REP of San Diego Repertory Theater. As they continue to navigate their professional career and question the erasure of QTBIPOC artists, they would agree with Victory Garden’s former Artistic Director Chay Yew when he states, “…you need to break that […] table down and build your own.” Their most recent credits include: Producer of Staged Stories: The Live Streamed Series (Breath of Fire), Assistant Director of American Mariachi (José Cruz Gonzalez, South Coast Rep), Director of Culture Clash in AmeriCCa (UCI), Mitra’s Suitcase (Yasaman Madadi, Frida Kahlo Theater 10-Minute Play Festival 2020), Bad Hombres, Good Wives (Herbert Siguenza, UCI), and Xicanas in Xicanalandia (Shanelle Darlene, Frida Kahlo Theater 10-Minute Play Festival 2019). Instagram: @_victoriazee

SANTI SÁMANO* (Producer / SM Tech) is a singer and actor from San Diego, California that takes a holistic approach to art and life. While their passion lies in singing and music, Santi is led by their curiosity to expand, learn and integrate as much as possible throughout their life. Santi’s greatest goal is to use their privilege to create a radically inclusive theatre company that entertains, heals, and empowers people of color at their varying intersections, emphasizing accessibility to queer and low-income communities. They are currently a fifth year at UC Riverside, studying Theatre and French and Assistant Director for UCR’s Latinx Play Project.

SARA GUERRERO* (Founding Artistic Director/ Advisor) is a Southern California native, is a professional, versatile theatre artist whose mission is to model, share and create theatre-making opportunities for and with her community. A CalArts alum, she has been recognized as one of the “People to Watch” by American Theatre Magazine, and “Best [Artistic] Director” and “Person of Interest” by OC WEEKLY. As the founding artistic director of Breath of Fire Latina Theater Ensemble, an award-winning, Santa Ana-based group, she and the ensemble are part of the artist-in-residence program of Grand Central Arts Center of State University of Fullerton, California. Under Guerrero’s leadership, the organization serves as an incubator for underrepresented voices in theater by providing programming and guidance in the art of storytelling. FOR FULL BIO and INFO visit South Coast Repertory and Oregon Shakespeare Festival Brown Swan lab 2017, San Diego Rep 2017, ’ (featured at the 35th annual William Inge Festival and Inkfest at Headwaters New Play Festival at YouthPLAYS). Libertadoras, Vamping and Linda were written for the Smith and Kraus’s 5-minute play anthology. She is currently writing material for Rogue Artists Plummer Park project and for Kaiser Permanente’s Educational touring show. She has also been a working actor since leaving the Professional Actors Conservatory in 1991. She originated the roles of Ama de Casa in the Spanish version of Menopause the Musical, Thumb in Imagine, and Holo-1 in the Labors of Hercules. She recently played Ana Guerrero in Jose Cruz Gonzales\’ Long Road Today/El Largo Camino de Hoy The People vs OJ Simpson, Cold Case, Betas.  She played punk Praetorian guard Viv in the cult movie musical, The Gourmet Detective. Diana is one of the original members of the writers circle for Latino Theatre Association/ Los Angeles. She is also a member of The Alliance of Los Angeles Playwrights.

RUTH MADRID (Graphic Designer) is a playwright and screenwriter based in Los Angeles and Riverside. Her works include El Recalentado, Inolvidable the Musical, Una Hora Mas, and La Tormenta de Ayer. Her works have been presented by the Latinx Play Project, UCR Playworks, and the Company of Angels. Ruth aspires to write interesting and dramatic stories that are hardly seen on screen or stage. She is continuing to pursue her passions in writing for herself and her community. Follow @MVDRID