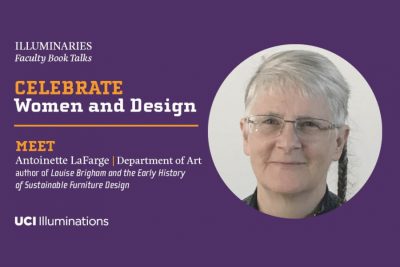 Peek into the past and future of sustainable design in this lively conversation between author and professor of Art Antoinette LaFarge and her colleague Jesse Jackson.

Peek into the past and future of sustainable design in this lively conversation between author and professor of Art Antoinette LaFarge and her colleague Jesse Jackson, featuring an unsung heroine from furniture history. Moderated by Julia Lupton (English).

The Book: Louise Brigham and the Early History of Sustainable Furniture Design

During the Progressive Era, a time when the field of design was dominated almost entirely by men, a largely forgotten activist and teacher named Louise Brigham became a pioneer of sustainable furniture design. With her ingenious system for building inexpensive but sturdy “box furniture” out of recycled materials, she aimed to bring good design to the urban working class. As Antoinette LaFarge shows, Brigham forged a singular career for herself that embraced working in the American and European settlement movements, publishing a book of box furniture designs, running carpentry workshops in New York, and founding a company that offered some of the earliest ready-to-assemble furniture in the United States. Her work was a resounding critique of capitalism’s waste and an assertion of new values in design—values that stand at the heart of today’s open and green design movements.

Antoinette LaFarge, Professor of Art, makes work that engages with the politics of virtuality, ephemerality, and role play through performance and installation, participatory media, net culture, and fictive art. She works and teaches using both analog and digital media, and she believes that computational literacy is a necessary part of the contemporary artist’s skill set. Recent new media performance and installation projects include Far-Flung Follows Function (2013) Galileo in America (2012), Hangmen Also Die (2010), WISP (World-Integrated Social Proxy) (2009-10), World of World (2009), Chronovacuum (2009), Playing the Rapture (2008-09), Demotic (2004/2006), The Roman Forum Project (2003), and Reading Frankenstein (2003).  She has co-curated two groundbreaking exhibitions on computer games and art: SHIFT-CTRL: Computers, Games, and Art (2000) and ALT+CTRL: A Festival of Independent and Alternative Games (2003).