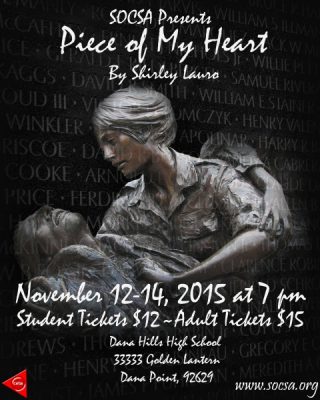 A Piece of My Heart

South Orange County School of the Arts at Dana Hills High School presents the true stories of six courageous women sent to Vietnam and their struggle to make sense of a war that irrevocably changed them in the contemporary drama A PIECE OF MY HEART, by Shirley Lauro.  Performances are November 12th -14th at 7pm.

This is a powerful, true drama of six women who went to Vietnam: five nurses and a country western singer, A PIECE OF MY HEART is the compelling portrayal of the women’s thoughts, feelings and emotions before, during and after their tour in Vietnam. Through their personal stories and shared memories, these women struggle with the choice to serve and the consequences of those decisions on the course and direction of their lives as they return different people who must reconcile their need to serve humanity with their experiences during war.  It is a piece that deals with the themes of service, heroism, life, death, trauma, forgiveness, sacrifice, despair and friendship. A PIECE OF MY HEART features the unsung heroes often overlooked in history.

More than 15,000 women served in Vietnam during the war years. At that time, there was little to no media coverage about women in Vietnam. In the 1980’s, Keith Walker spent 2 years doing nationwide interviews including nurses, officers, Red Cross workers and entertainers – all who shared the common experience of serving their country in Vietnam. Keith then wrote a book, A Piece of My Heart: The Stories of 26 American Women Who Served in Vietnam.  Walker’s book has been transformed into a powerful drama by Shirley Lauro, A PIECE OF MY HEART that is meant to be representational of many different experiences and personalities.  A PIECE OF MY HEART premiered in New York at Manhattan Theatre Club, and now has enjoyed over 1000 productions here and abroad. It has been named "The most enduring play on Vietnam in the nation," by The Vietnam Vets Association.

In conjunction with the production run of A PIECE OF MY HEART events are planned for our community veterans. Performances are November 12th and 13th at 7pm at the Porthole Theatre.