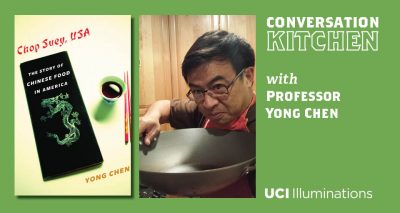 Presented by University of California, Irvine (UCI) at Online/Virtual Space

UCI Illuminations presents a conversation with Professor Yong Chen author of "Chop Suey, USA."  At this event, Professor Chen and Chef Jessica Van Roo will share recipes and the history behind them.

American diners began to flock to Chinese restaurants more than a century ago, making Chinese food the first mass-consumed cuisine in the United States. By 1980, it had become the country's most popular ethnic cuisine. Professor Yong Chen’s book Chop Suey, USA offers the first comprehensive interpretation of the rise of Chinese food, revealing the forces that made it ubiquitous in the American gastronomic landscape and turned the country into an empire of consumption.