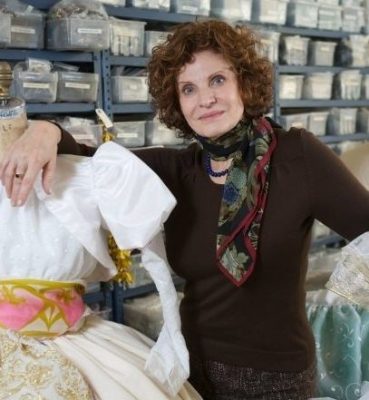 This series intends to engage the UCI community with national and international participants and focuses on the diversity of artistic practices.

Ann Hould-Ward is an American costume designer, primarily for the theatre, opera and dance, who has won national and international acclaim. She is the recipient of multiple Tony Awards and Drama Desk Awards (Into the Woods) as well as the Los Angeles Drama Circle Award, the American Theater Wing Design Award, Ovation Award, Outer Critics Circle Award and the Olivier Award (internationally the highest honor in British theater and equivalent to Broadway’s Tong Awards and France’s Moliere Award),   Ms. Hould-Ward’s work can be seen in over 35 international companies of Beauty and the Beast, and at the Salzburg’s Festival’s West Side Story, The Bronze Idol (Mikhailovsky Theater) and many more.

Hould-Ward’s Broadway credits include: The Visit, The People in the Picture, A Free Man of Color and A Catered Affair, both of which received Drama Desk nominations, Company, Dance of the Vampires, Beauty and the Beast (1994 Tony Award, as well as American Theatre Wing’s Design Award, Ovation Award and an Oliver Award nomination for Best Costume Design); Into the Woods (Tony, Drama Desk nominations, Outer Critics Circle nomination and Los Angeles Drama Critics Circle Award), Falsettos, Sunday in the Park with George (Tony, Drama Desk Nominations), Harrigan ‘N’ Heart, A Midsummer Night’s Dream, St. Joan, Three Men on a Horse, Timon of Athens, In the Summer House, Little Me and The Moliere Comedies.

Hould-Ward’s awards include U.S. Representative for the International Design Quadrennial in Prague. She is also a recipient of the Fashion Institute of Technology’s Patricia Zipprodt Award.