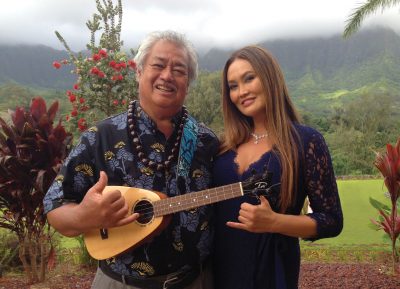 “…the vocals and slack key wizardry of George Kahumoku…is as cleansing as a Sunday drive through God’s country.” — The Honolulu Advertiser

Known as Hawai‘i’s “Renaissance Man,” George Kahumoku Jr., is a master slack key guitarist, a four-time Grammy Award winner, and an accomplished songwriter. Using his very personal melodic style, inventiveness, and versatility, Kahumoku conveys the genuine spirit of Hawai‘i’ to all his listeners.

Daniel Ho is a multi-instrumentalist, composer, arranger, and performer, with talent and versatility on ukulele, slack key guitar, piano, and vocals. He's a six-time Grammy winner, with four of his Grammy credits as producer of George Kahumoku’s four Grammy-winning recordings. His two other Grammy wins were for performances with his close friend, Tia Carrere.

International star and two-time Grammy winner, Tia Carrere first came to fame by showcasing her considerable singing and acting chops in the film Wayne’s World. She went on to star in many featured roles in film and television, before returning to her Hawaiian roots and creating two of her Grammy-winning albums with Daniel Ho.