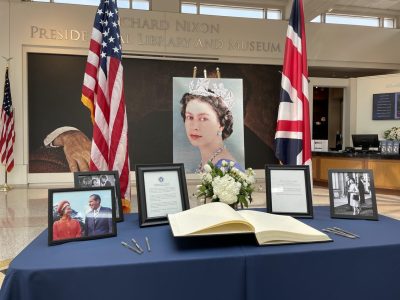 The Richard Nixon Foundation invites the public to visit the Richard Nixon Presidential Library and Museum in Yorba Linda starting today to pay tribute to Her Majesty Queen Elizabeth II.

The Nixon Foundation will collect condolence messages in a book that will be delivered to the Royal Family. Messages will be collected in the Annenberg Entrance Court from 10 a.m.-5 p.m. through September 28, 2022.

The Board of Directors and everyone at the Richard Nixon Foundation extends sincere condolences to the British people and to those across the Commonwealth on the passing of Her Majesty Queen Elizabeth II.

The Queen was a leader of unparalleled ability, a pillar of strength in the Western world who brought inspiration, hope, reassurance and stability to all of the countries of which she was Sovereign, and to her friends across the world, for a staggering seven decades.

On her first trip to the United States as Queen, Vice President and Mrs. Nixon greeted her on behalf of the American people, beginning a special bilateral friendship that would last for the next seventy years.

Free at the Annenberg Entrance Court |  Does not include Museum admission