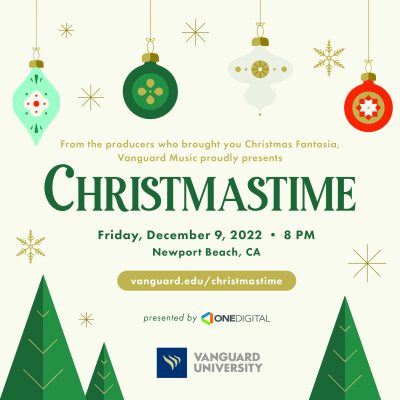 Presented by The Department of Music at St. Andrew's Presbyterian Church of Newport Beach

Held in the impressive 1,200 seat sanctuary of St. Andrew’s Presbyterian Church in Newport Beach, Christmastime will feature some of the most beloved Christmas carols and festive favorites, showcasing more than 200 performers from seven ensembles, a newly-formed community choir, and members from local schools in the Newport-Mesa Unified School District.

Vanguard Music ensembles have long been noted for their inspiring and excellent presentation of sacred vocal and instrumental music, having performed at venues such as Carnegie Hall and Lincoln Center in New York to touring internationally to Germany, Korea, and the Philippines. The music faculty have advanced degrees from Juilliard, Yale, and the New England Conservatory of Music, and bring excellence from the highest levels of performance. Most are working musicians who lend their talents to film soundtracks, television shows, jazz studio sessions, with performers such as Andrea Bocelli, Dave Koz, and Barry Manilow, and in live performances at the Hollywood Bowl and Walt Disney Concert Hall.