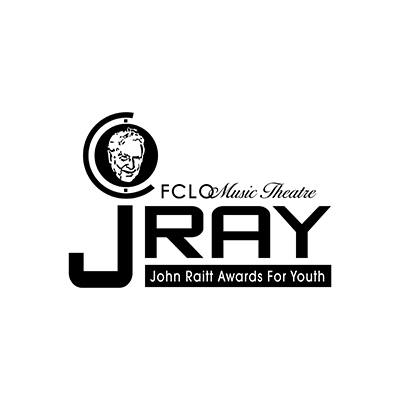 The JRAY mission is to promote and support high school education by recognizing musical theater excellence in all performance and technical production categories, and to provide outstanding students with unique opportunities and professional exposure through the granting of awards and educational scholarships.

The JRAYs were named to honor John Raitt, a successful stage, film, and television actor who began his performance career as a Fullerton Union High School student in Plummer Auditorium. One of his last performances was in the role of “Zorba” for Fullerton Civic Light Opera (FCLO) Music Theatre, the organization under which JRAY operates.

JRAY Awards are given for on stage and behind the scenes work. Qualified judges view and rate each of the participating schools’ shows during the school year, which culminates in the JRAY Awards Ceremony at the end of the high school season.  JRAY gives over 200 awards for achievement in 28 categories.

Both the Male Actor of the Year and Female Actress of the Year are awarded $1000 each and sent to New York for a one-week, all expenses paid, intensive workshop with Broadway Professionals.  Their experience finishes with a showcase before Broadway Agents and Casting Directors. For details see broadwayartistsalliance.org.

The JRAY program operates under the umbrella organization of FCLO Music Theatre, which was founded as a nonprofit organization in December 1971, under the organizational name of Fullerton Civic Light Opera Music Theatre.  FCLO delivered high-quality live musical theater in the Orange County Performing Arts scene for over 45 years.  They won numerous awards for their productions and provided a platform for performers young and old to hone their craft and entertain audiences from all over the Southland.

Today, the exclusive focus of FCLO is on JRAY Awards, which is managed by a Board of Directors, all of whom are volunteers.