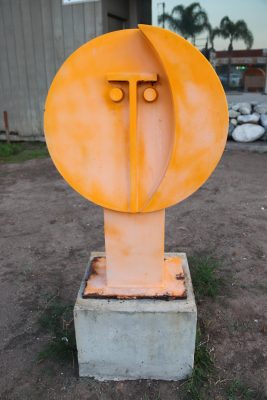 Vladmir Cora’s sculptures Hombre and Mujer are situated in front of Mesa Art and Framing on 19th Street. Vladimir Cora is a Mexican painter and sculptor based in the state of Nayarit, whose work has been recognized by various awards and membership in the Salon de la Plastica Mexicana. He recieved training in Tijunana and Mexico City, with his first success in the 1980s. His style is described as neo-figurative, minimalist and coarse, and he creates his works in series usually related to the apostles, flowers, birds and women, especially those related to Nayarit. He has had over 150 individual exhibitions both in Mexico and abroad and continues to work from his home state.