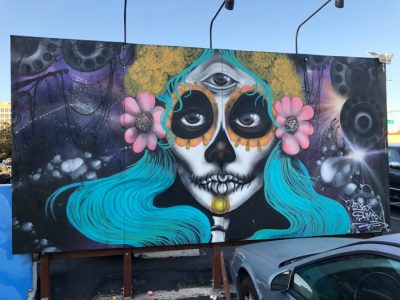 Painted by Bud Herrera and Kimberly Duran and located on a billboard in the McFadden Market Place parking lot, the 15 foot by 18 foot mural depicts La Catrina as a white skull with flowing blue hair, two pink flowers adorning her hair, as well as a crown of yellow and orange flowers. Additionally La Catrina has a third eye in the middle of her forehead, and she is flanked on both sides by strange machines. The mural itself was created shortly after the Public Market was transformed into a food hall/arcade that it is now, and stands as a remembrance of lost Mexican culture amidst a mechanical modern world and increasingly technological society.