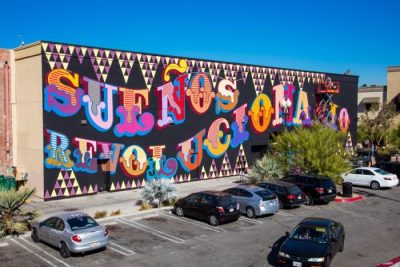 Ben Eine’s Suenos Revolucionarios (Revolutionary Dreams) features highly stylized British pop art words sitting on top of a solid black-drop accented with beige and purple triangle patterns. The work itself was made as part of a mural tour Eine did in 2015, which spanned from Laguna Beach to Los Angeles. During the tour, Eine created murals in each city he stopped at, with the goal of representing the atmosphere of the city. Suenos Revolucionarios pays homage to the street art of Santa Ana, specifically the influence of the 20th century Mexican Renaissance on the cityscape.