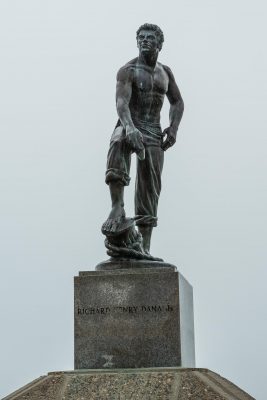 This 1972 sculpture by John R. Terken has a view of the ocean and also a view of the Dana Cliffs. Richard Henry Dana Jr. was a seaman, politician, lawyer, and author. He is noted for being a defender of seamen and fujitive slaves. The City of Dana Point is named after him.

He had traveled here (from his home in Massachusetts) and along the California coast in 1834 when the area was still part of Mexico. The plaque on the base of the sculpture reads: “Richard Henry Dana Jr./ 1815-1882/ In 1835, Dana arrived on board the brig ‘Pilgrim’, a tall-masted sailing ship out of Boston, bound for the California coast. For reasons of health, Dana left his studies at Harvard and at the age of 19 signed on to the ‘Pilgrim’ as a common sailor. Later he vividly described life on ship and on shore in his famous book “Two Years Before the Mast” (1840). In 1884 Dana Point was named in his honor, in memory of his brief visits and enthusiastic description of this beautiful place.”

Larger than life size, the full-length figure of Richard Henry Dana, Jr.  is shirtless and wears pants which are rolled up to mid-calf. His proper right foot rests on a bitt, which represents the deck of a ship. In his proper right hand he holds a notebook. A sheathed knife hangs from his belt. His proper left arm is akimbo. The bronze figure stands on a square marble base which rests on a pyramidal concrete aggregate base.