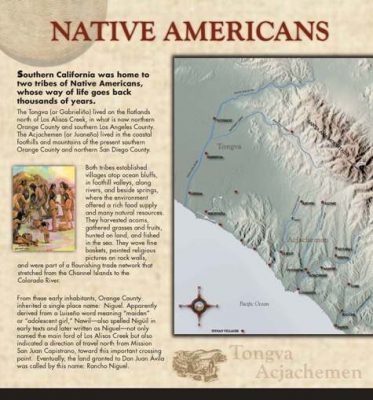 Four panels representing early California themes on the lobby wall were developed for display in the Civic Center lobby representing specific themes and time periods: Native Americans; The Portola Expedition; Early Ranchos; and From Ranchos to Cities. When Paul came to Southern California in the early 1970s, he worked for a time as a carpenter. Eventually, Paul and a partner specialized in building curved wooden staircases, and he settled in Carlsbad, California with his wife Claudia, an elementary school secretary and artist. Employing the mixed media of engraved stone, high-pressure laminates, and metals, and stone imagery, in Paul’s words, “brings an entertaining and artistic approach to development, recognition, and interpretation.” He explains, “Most of our projects are collaborative experiences in which we learn from everyone we work with and share the spotlight with other members of a team.” Indeed, Paul and Claudia are a team. Paul coordinated their projects, they work together to create the designs, Paul selects materials and shapes the stone, and Claudia illustrates and does the engraving. When Stone Imagery met with Laguna Hills representatives to discuss creating a life-sized metal vaquero on horseback lassoing a wayward calf for the Civic Center lobby, it was Caludia who quickly captured the concept in sketches she produced on a paper napkin.