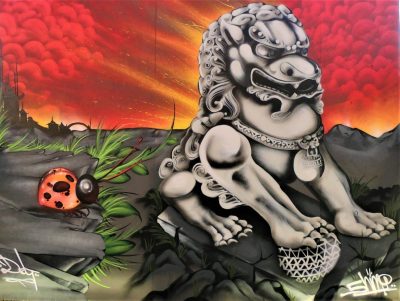 A Chinese stone lion is seen overlooking a spark or inferno of some sort. It was painted in homage of Santa Ana’s very own Chinatown, which was burned intentionally to the ground on May 25, 1906.

The flames are off in the distance covered by the stone lion. “We try not to put controversial imagery, or any kind of negativity out there,” Herrera said. “We’re utilizing our skills. This is what we do to uplift the people. We want to make it more pleasant for people’s daily commute or everyday living.”