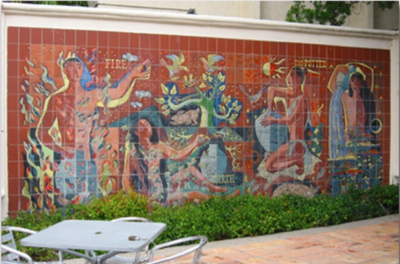 Earth, Fire, Water, and the Potter

Earth, Fire, Water, and the Potter

This large partially glazed terra cotta tile mural, was commissioned for an LA County Fair exhibition, and was later moved to its current location in the Mervado Village. While an impressive work of art, it is in need of some TLC. Jean Goodwin Ames was born in Santa Ana, California in 1903. She studied at the Chicago Art Institute and Pomona College, and earned a BE from UCLA and an MFA from USC. Her master’s thesis was a majolica tile mural, Youth and Science, in the lobby of the USC Science building. Three of her tapestries, woven in France, are at the Garrison Theater, Claremont Colleges. She was named Woman of the Year in Art in 1958 by the Los Angeles Times. Ames was an instructor at Chaffey and Scripps College.