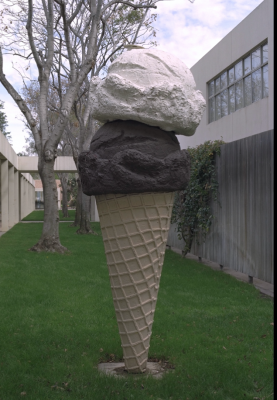 This fiberglass sculpture is located at the Visual Arts Center.

This campus landmark is the second of two such “found” sculptures that became part of the Cal State Fullerton Art Department. As legend has it, the original was rescued in the late 1960s from the roof of the demolished Brookdale Ice Cream store at the corner of Chapman and State College. Conceptually, this literal visualization of a gigantic ice-cream treat fits in with pop-art movement. This earlier version stood for years at the entrance to the art department’s first temporary quarters until it was stolen. The thieves were not entirely successful; the top scoop of “ice cream” bounced off the truck during their hasty get-away and was left behind. In 1973, then-gallery director Dextra Frankel discovered an identical piece during her search for salvaged signs to include in the exhibition “Neon Signs & Symbols.” Frankel had this new version brought to campus and installed in its present location. Professor Don Lagerberg gave the ice cream scoops their original strawberry and mint “flavors” which later were changed to chocolate and vanilla by Dean Jerry Samuelson. It is now repainted annually each spring as part of ArtsWeek, with the “flavors” chosen by the Dean of the College of the Arts.