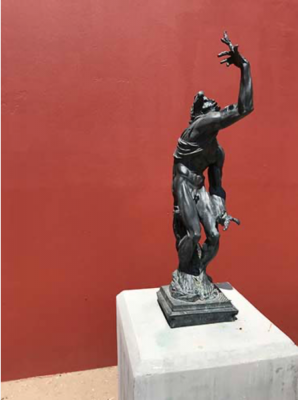 This bronze sculpture is located at the east entrance to the Visual Arts Center Building D. It was a gift of Archives Szukalski and Decker Studios.

Stanislav Szukalski (1893–1987) was born in Warta, Poland, and first came to the United States as a teenager. Living in Chicago, he became one of the city’s renaissance luminaries that included Ben Hecht, Carl Sandburg and Clarence Darrow. The oldest work in the Cal State Fullerton sculpture collection, Imploration was sculpted when Szukalski was only twenty-one years old. In the 1930s, he returned to Poland amidst great acclaim and was given his own museum by the Polish government.

Because of the German invasion of 1939, he fled Poland, returning to the United States and leaving behind an entire oeuvre that was never recovered. Szukalski lived out the remainder of his life in California, without recognition and obsessively involved with writing and creating artwork intended to prove an obscure theory that all humankind came from Easter Island after the biblical floods.

This figure is sculpted in the nude with an emphasis placed on the hands and arms that are articulated to express tension. The contours of the figure are made so that the light reflects across the surface activating and even abstracting the form in a technique similar to French artist Rodin.