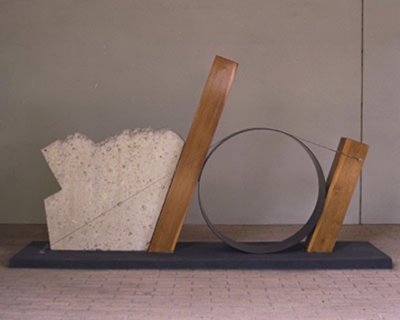 Douglas fir, steel, and Texas shed stone sculpture is located at the Newquist Sculpture Court at the Visual Arts Center. It was a gift of Thomas W. Knaup.

Guy Dill once said, “Raw materials bring you closer to an idea.” In his work, metal, marble, concrete, and wood are used in unfamiliar ways, pushing them, in his words, “just about as far as they go.” Known for geometric abstractions, in his early career the circle served as a fulcrum for his compositions; later he added the column as a “connection and icon.” Here the artist uses colors and surfaces to provide “real-energy.” Millwood, the first piece commissioned by the Newquists for their collection, balances between motion and rest.

Originally from Florida, Guy Dill (1946– ) attended the Chouinard Art Institute in Los Angeles and earned a B.F.A. He currently lives and works in both Venice and Brussels. Nationally recognized, his work has been exhibited by the Solomon R. Guggenheim Museum, The Museum of Modern Art, and the Whitney Museum of American Art, among many others.