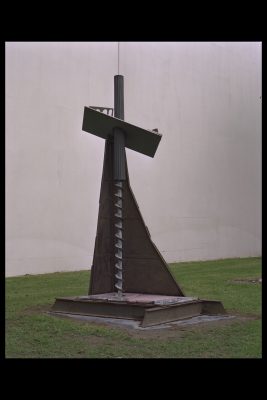 This steel and terrazzo sculpture is located between the two-story buildings in the Visual Arts Center. It was a gift of Louise and Richard Newquist.

According to the artist, “This sculpture was created in the midst of a decade which started with the hostages in Iran being freed and ended with the fall of the wall between East and West Berlin. In between those events the cold war was heightened and the arms race accelerated. We had Reaganomics, the deregulations of S&L’s, junk bonds, shady arms dealings and the rise of terrorism. This was a time of euphoria but also one of great tension. What kind of future were we creating with foundations built on speculation and space weaponry? I remember having a sense that at any time things could implode, and with the threat of nuclear war, a truly apocalyptic end.”Davis states, “Out of industrial remains, emerges a surrealist landscape whose proportion is against time and space.

Terra Firma/Terra Incognita is one or the other: solid ground or unknown territory.” The sculpture is made up of vertial, diagonal and triangular geometric shapes. It reminds one of a sail hoisted on a found corkscrew mast. On the crossbar of the mast on the back of the sculpture, two building forms are visible perhaps referencing the solid ground sought.

Michael Davis (1948–) received both his B.A. and M.A. from Cal State Fullerton. He is an NEA Fellow. In recent years, he has devoted substantial energies to public art projects. His work is in major private and public collections throughout the United States.