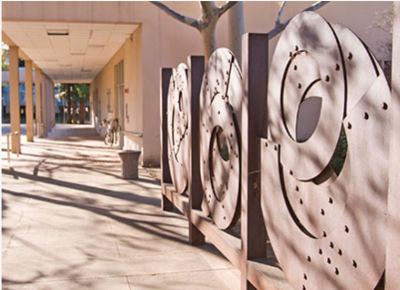 This non-figurative sculpture was commissioned for the courtyard site of the Visual Arts Center shortly after the installation of Rosenthal’s large-scale sculpture, Alamo, in the middle of Astor Place in New York. Terrace Screen was constructed in overlapping sections that form a system of interlocking geometric shapes.

Bernard Rosenthal (1914–2009) studied at the Art Institute of Chicago and graduated with a B.F.A. from the University of Michigan. This sculpture was constructed in his studio in New York City and installed by the artist on site. His large sculptures can also be seen on the University of Michigan campus and at the Smithsonian in Washington D.C. His work is in the collections of museums throughout the United States including the Los Angeles County Museum of Art, the Whitney Museum of American Art, and The Museum of Modern Art in New York City.