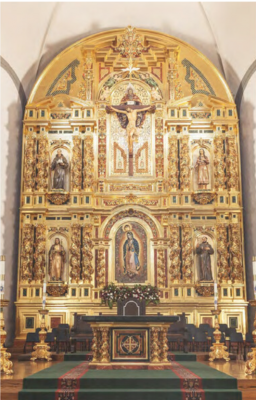 The Mission Basilica Retablo and Motifs

The Mission Basilica Retablo and Motifs

Dr. Norman Neuerburg and Others

The centerpiece of the Basilica is the magnificent gold-leafed Retablo, installed behind the altar in 2007. The Retablo was crafted in Spain and is designed in the baroque style that flourished in the 17th century. The statues on the Retablo are St. Junipero Serra, Blessed Kateri Tekawitha, St. Joseph, and St. Francis of Assisi. “The Grand Retablo, a book by Reverand William Krekelberg that describes every detail of the Retablo and other fine adornments in the Basilica is available at the Mission Book Store.

The paintings or motifs on the interior walls were designed and painted by the artist, Dr. Norman Neuerburg over an 18 month period. Dr. Neuerburg was a a historical consultant to many of the missions as well as the Getty Museum in Pacific Palisades.