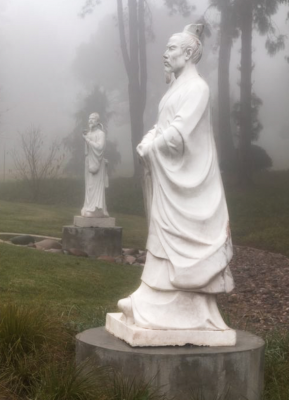 At the edge of the garden stands the statue of poet Lai Bi, who lived during the “Golden Age” of Chinese poetry. Sometimes called the “Poet Immortal,” Lai was a bohemian wanderer who often secluded himself in the mountains, as is represented by the ring of smooth stones which surround him in the garden. Here, he stands with one hand folded behind his back and the other raised pensively.

Next statue is the goddess Magu. She is half-hidden behind Winter Blooming Bergenia. In ancient Chinese philosphy, she was the goddess of longevity and is represented here as a beautiful young woman nodding her head toward a large bloom in her hand.

At the forefront of the garden stands the statue of statesnan Qu Yuan, who played an important role in ancient elite cultural tradition. He stands with his hands clasped and with a stoic expression and surrounded by course grass that is intended to look like flowing water.

Finally, the bearded statue of philosopher Lao Zi sits serenely, cross-legged in the far corner. The robe-clad statue is surrounded by Lily Turf and Pinkhead Smartweed that have been crossed to represent balance with nature.