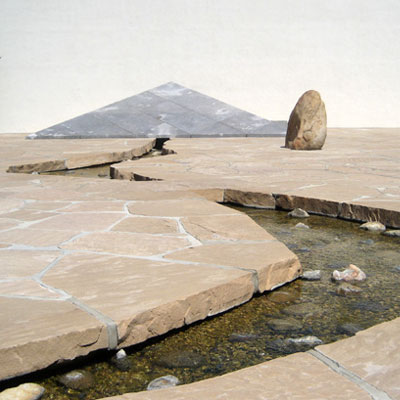 California Scenario is a composition of balances. The forms and symbols chosen to represent California in the work reflect both a basic understanding of archetypal units of California, and of an overall mystery. A stack of boulders, hand picked from the California desert is one such symbol. The individual piece titled by Noguchi, “The Spirit of the Lima Bean”, is both a wonder of construction and visually remarkable. Simple in its meaning, the large grouping of rocks reflects the essence of the lima bean, the crop that was framed in the area prior to development. A large sculptural form represents the mountains, stream paths represent the valley, a stand of redwoods represent the mountains and a mound of sand and cacti represent the desert. Each of these elements is effective in its simplicity.