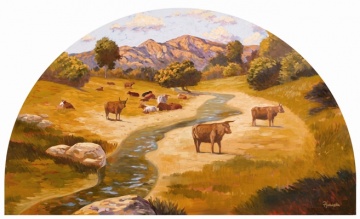 Laguna Hills resident David Harrington cannot remember a time when he did not love to draw. As a young boy growing up in Covina, California, he divided his attention between basketball and art. When he was about eight years old, a visit to the Los Angeles County Museum of Art tipped the scale in favor of the latter. “I stood looking at the beautiful paintings for hours and hours” he recalls, “and knew then that art would always be very important to me.” Several years later, at the age of thirteen, he began to paint and has never stopped.

David studied at the Art Center College of Design in Pasadena, where he majored in illustration, earning a Bachelor of Fine Arts and graduating with honors in 1988. In the score of years that have passed since then, he has painted for a number of clients, including MGM Studios, Random House Publishing Group, and 20th Century Fox. In 1998, Warner Brothers asked David to create artwork for its 75th Anniversary, and one of his pieces was highlighted on the cover of Variety, the entertainment industry weekly.

For the Laguna Hills Civic Center lobby wall, David has painted three impressionist scenes depicting the principal land uses in the Saddleback Valley: raising cattle, growing crops, and cultivating citrus groves. Before touching brush to wood, David studied historical photographs of the area and hiked over the land, noting carefully the ways in which light played across the gently rolling hills and creek-carved valleys, and imagining what the area might have looked like more than a century ago.

David and his wife Sidney were married at the Hotel Laguna, in Laguna Beach, in 1990. Three years later, they chose to make their home in Laguna Hills because-as David explains-they were attracted by this community’s family-friendly atmosphere and proximity to several of their favorite Orange County beaches. David and Sidney have three children: Chase, Nick, and Emma.